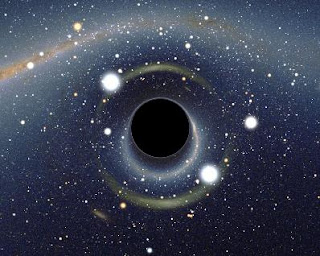 A Black Hole is a region of space in which the gravitational force is so powerful that nothing, including light, can escape its pull.
Black Holes are formed when a large star runs out of fuel and it can no longer support its heavy weight. The pressure from the star's massive layers of hydrogen press down forcing the star to get smaller and smaller and smaller. Eventually the star will get even smaller than an atom. Imagine that for a moment an entire star squashed up into less space than a tiny atom! But by making the star smaller, its gravity becomes much stronger. A black hole's gravity becomes so powerful that everything, including light, that gets too close, gets pulled in. That's right, not even light can escape the grasp of a black hole. The middle of a black hole is called a Singularity. When you get too close to the singularity you will begin to fall into it. When you begin to fall toward it you know you have passed the Black Holes Event Horizon. The Event Horizon is a one-way surface into which objects can fall, but out of which nothing can come.
The Hubble Telescope website has a fantastic video explaining how Black Holes are formed. Click here to visit the site. This is the final Science Fact of the Week for this academic year. The next Science Fact of the Week will return in September!
Labels: Physics Stuff Science Fact of the Week