Below is an extract from an article from New Scientist. 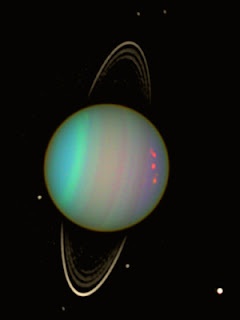 Please try to resist the childish jokes, but the fact is that the odd tilt of Uranus may be the result of a particularly large moon. Uranus spins on an axis almost parallel with the plane of the solar system, rather than perpendicular to it – though why it does this nobody knows. One theory is that the tilt is the result of a collision with an Earth-sized object, but this "hasn't succeeded in explaining much of anything", says Ignacio Mosqueira of the SETI Institute in Mountain View, California. Why, for example, are the orbits of Uranus's 27 known moons not also tilted.

Now Gwenaël Boué and Jacques Laskar at the Paris Observatory in France have come up with another explanation: Uranus may once have had an unusually massive extra moon. If the moon had 1 per cent of the mass of Uranus – and orbited at a certain distance – it would slightly unbalance the planet and increase its wobble about its axis. After about 2 million years, the wobbling could have become exaggerated enough to tip the planet on its side. Read on.
Labels: Astronomy