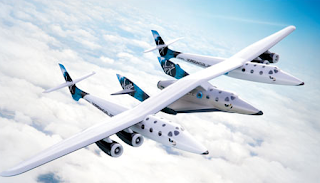 Last week, Richard Branson revealed his new Virgin Galactic Space Ship 2 (SS2) which will begin transporting space tourists into the upper atmosphere in the coming years. SS2 is 12ft long and is designed to carry six "space tourists" and two pilots beyond the Kármán line (the generally acknowledged boundary of space, 100km up). For a few minutes, they will experience weightlessness while gazing out of aeroplane-style windows at the curvature of the Earth, the thin surface of the atmosphere and, perhaps, other planets. By then the rocket's engines will have been switched off, so the ensuing silence will add to the power of the experience. SS2 has been in development for nearly five years, alongside the construction of White Knight Two (shown above transporting the SS2) – the 140ft wingspan "mothership" that will ferry the smaller rocket ship 50,000ft into the sky before it detaches, then blasts up to the edge of space at up to 2,600mph. Amazingly, while each Space Shuttle mission is estimated to cost around $1bn, a Virgin Galactic flight (obviously much shorter, and far less complex) is put at less than $2m.
Labels: Feats of Engineering Today's Science News