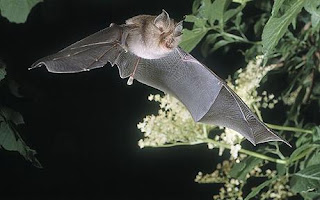 Bats, like all mammals, are covered in fur, they have warm blood, they give birth (rather than laying eggs) and they suckle their babies with milk. Of the nine species of bat that are resident in Ireland, the Lesser Horseshoe Bat (or Rhinolophus hipposideros) is one of the rarest. It is called the lesser horseshoe bat because it has a horseshoe-shaped flap (called a noseleaf) around its nostrils. The Lesser Horseshoe Bat is one of the world's smallest bats, weighing only 5 to 9 grams, with a wingspan of 192-254 mm and a body length of 35-45 mm. Because they have a weak echolocation (or navigation) system, lesser horseshoe bats need to have landscape structures such as trees, woodlands, walls and hedgerows in order to be able to find their way around and hunt for food.
The lesser horseshoe bat is found in parts of the west of Ireland, from Mayo to Cork. Lesser horseshoe bats use old abandoned stone buildings with slate roofs for their summer roosts. Modern buildings are often unsuitable. Most lesser horseshoes hibernate in mines, caves, cellars or ice houses during the cold winter months. They do not huddle together in groups during hibernation, like other species do, though there may be a number of bats in one hibernation site. Lesser horseshoes feed at dusk, hunting for midges, moths, crane flies and caddis flies. They catch their prey in flight or pick them off vegetation.
Young are born in maternity colonies in late June or early July. If the colony is disturbed, the mother may carry her baby to a new roost. The young bat grows quickly and is independent after about five weeks.
Labels: Ireland's Fauna Ireland's Mammals

marion said…
I recently came accross your blog and have been reading along. I thought I would leave my first comment. I dont know what to say except that I have enjoyed reading. Nice blog. I will keep visiting this blog very often.