This is the final Science Fact of the Week of this term and indeed 2009. 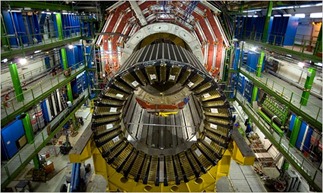 The Large Hadron Collider (LHC) is a particle accelerator used by physicists to study the smallest known particles – the fundamental building blocks of all things. The LHC lies in a tunnel 27 kilometres in circumference, as much as 175 metres beneath the Franco-Swiss border near Geneva, Switzerland. In the LHC experiment, two beams of subatomic particles called 'hadrons' – either protons or lead ions – will travel in opposite directions inside the circular accelerator, gaining energy with every lap. Physicists will use the LHC to recreate the conditions just after the Big Bang, by colliding the two beams head-on at very high energy. Teams of physicists from around the world will analyse the particles created in the collisions using special detectors in a number of experiments dedicated to the LHC. There are many theories as to what will result from these collisions, but what's for sure is that a brave new world of physics will emerge from the new accelerator, as knowledge in particle physics goes on to describe the workings of the Universe

The Large Hadron Collider was built by the European Organization for Nuclear Research (CERN) with the intention of testing various predictions of high-energy physics, including the existence of the hypothesised Higgs boson, or God particle. With a 3 billion Euro budget, the LHC is the most expensive scientific experiment in human history. It has the potential to find the answers to so many questions we still have about our universe like; How did our universe come to be the way it is? What happened in the Big Bang? Where is the antimatter? Why do particles have mass? What is our Universe made of?

Click here to find out more about the big questions that the Large Hadron Collider is trying to uncover. Or click here to read the BBC's excellent guide to the LHC.