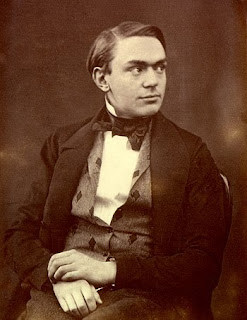 Alfred Nobel was born in Stockholm, Sweden, on October 21, 1833. Alfred Nobel is best known as a chemist and inventor of dynamite and other, more powerful explosives but also for the annual prizes which bear his name. Today, December 10th, is the anniversary of his death in 1896 and also the anniversary of the first Nobel Prizes in 1901.
An explosives expert like his father, in 1866 he invented a safe and manageable form of nitroglycerin he called dynamite, and later, smokeless gunpowder and (1875) gelignite. He quickly created an industrial empire manufacturing many of his other inventions. Nobel amassed a huge fortune, much of which he left in a fund to endow the annual prizes that bear his name. The first Nobel Prizes were handed out for achievements in the areas of physics, chemistry, physiology or medicine, literature, and peace. The sixth prize, for economics, was instituted in his honour in 1969. For more information on the life and work of Alfred Nobel click here.
Labels: On This Day People in Science