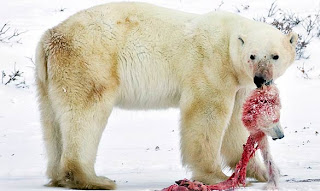 The number of witnessed cases of polar bears eating young bear cubs seems to be on the increase. The picture above shows a male polar bear dragging the grisly remains of a cub that it caught and killed in the Hudson Bay area, Canada, after separating it from its mother. Some scientists are saying that this is related to climate change and the increased difficulties being placed on the bears hunting habits. The bears are may be forced into eating their own kind when the slower formation of Arctic ice leaves them with a shrinking platform from which to hunt seals. However, Inuit leaders dismissed the idea of any link between cannibalism and climate change saying that this was a "common occurrence". Never the less, the picture tells a harrowing tale.
Labels: Nature Notes Today's Science News