Following on from last week's news that the Irish genome has been mapped for the first time, Frank McNally from the Irish Times has taken a deepen look into the research and discovered some fascinating and hilarious findings.
This article first appeared in last Saturday's Irish Times Weekend supplement and has been reproduced here with the author's permission. 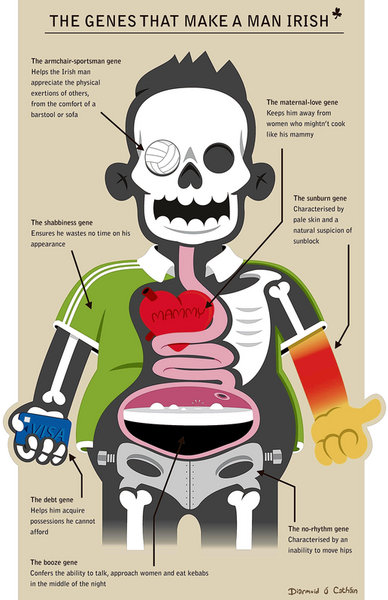 Scientists have mapped the DNA of an Irish person – an anonymous male volunteer – for the first time. Now the challenge is to find out which of the 300,000 previously unrecorded genetic variations is unique to, or typical of, Ireland. We predict some of the findings.
CH1 The CH1 gene variant gives rise to a condition, believed to affect countless thousands of Irish people, known as “cute hoorism”. Sufferers have unusually sensitive skin, capable of identifying which way the wind is blowing, even when there’s no wind. By contrast, certain areas of the body – typically the neck – appear to be less-than-usually receptive in those affected. Carriers of the CH1 gene are known to be at high risk of a career in politics or selling second-hand cars.
BEG Located on chromosome 21, the Irish begrudgery gene primarily exercises a memory-control function. When triggered by a friend’s lottery win, a colleague’s promotion or a neighbour’s purchase of a top-of-the-range BMW, it calls up a photographic image of that person, earlier in life, when he “didn’t have an arse in his trousers”. See also LRH.
CK1 Contrary to what the GAA would have us believe, county identities are not part of the Irish DNA. Cork people, however, may be an exception. Overproduction of a protein normally regulated by a gene found on chromosome 11 appears to be responsible for many of the traits known collectively as the “Cork personality”. Work on a cure for this condition continues, and recent experiments on mice have yielded promising results.
R1/TTJ Despite a reputation for rebelliousness, most people in Ireland are deeply reluctant to complain about things publicly: whether by returning unsatisfactory food in restaurants, like Americans, or hijacking vehicles and setting fire to them, like the French. But an estimated 10,000 Irish people have a mutant gene that gives rise to a disorder known as R1/TTJ, which makes them want to complain about everything, to the largest possible audience. The condition is named after a well-known radio station and one of its catchphrases: “Talk to Joe”.


IMG The “Irish Mother Gene”, generally inactive in males, encourages a feeling of martyrdom in childbearing females, while also causing them to worship their sons. Scientists believe it may have a secondary role in spleen production, which would explain why younger, childless women can be severely scornful about the “Irish Mammy” phenomenon, before they too give birth and – possibly triggered by progesterone – the IMG takes over their personalities.
GK(MF)S A number of genes located on chromosomes 17, 18, and 21 are thought to explain the condition whereby Irish men cannot move their hips while dancing. The genes conspire to suppress (violently, if necessary) a chemical vital to the full movement of the hip-flexor muscle. In certain conditions, however, the chemical may be suddenly released, with emigration to the US appearing to play an important role. Hence the name of the variant, GK(MF)S; referring to “Gene-Kelly (Michael Flatley)” Syndrome, a rare disorder by which Irishmen develop an extreme capacity for moving all their body parts simultaneously. See also RIS.
HG1 Many different genes are responsible for producing what are considered typical Irish physical traits: curly hair, freckles, faces only a mother could love, etc. But it is suspected that a master gene located on chromosome 7 may be responsible for arranging the overall Irish “look”. A rare mutation of this gene would help explain localised, freak phenomena such as the Corr sisters and Pierce Brosnan. But the HG1 name comes from a more typical cinematic representation of the rugged Irish male, and its possible cause: the so called “Hackman-Gene”.
LRH Found on all 23 chromosomes, the LRH is perhaps the quintessential Irish gene variant, regulating a person’s general sense of identity. More precisely, it alerts the brain to deviations from that norm, in which cases the person affected is said to have “lost the run of himself”. The gene is notably more successful at tracking this problem in others, as opposed to its own host individual. And more research is needed to explain why, in recent years, so many Irish people knew that the rest of the country was losing the run of itself, while not realising they too might have a problem.
CRC As long suspected, the Irish propensity for “having the craic” is the result of a number of local gene variations. The lack of social reserve – vis à vis the English, for example – appears to arise from a relative inability to absorb calcium: especially in the upper lip. The condition is normally benign. But stimulated by alcohol, the CRC variant can sometimes cause unpredictable behaviour: such as an irresistible urge to set fire to the newspaper of a person sitting opposite you on the late-night bus. Afterwards, the instigator will typically explain that he did it only “for the craic”, although this defence is not yet recognised by the Irish courts.
PP Early in the sequencing project, geneticists thought they had identified a variant that caused strong belief systems in those affected: the so-called “party-political” gene. But before they could study this in detail, the DNA involved appeared to have spontaneously split itself in two parts, nicknamed the “official” and “provisional” variants by scientists. The process has since repeated itself and there are now so many offshoots that work on this part of the genome has been suspended pending the recruitment of extra staff.
Labels: Light Hearted Moment Web Links