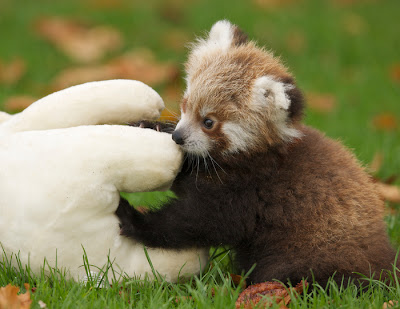 The latest addition to the brilliant Fota Wildlife Park in Cork, a baby red panda, will make its first public appearance today. The little cub was born on the 8th of July this year and is the first red panda born in the park since 1993. The red panda is an endangered animal and breeding programmes like are extremely important for the survival of the species. According to their website, the birth came as a bit of a surprise to Park Director Sean McKeown:

"The male red panda Bamboo who is 15 years old is one of the oldest red pandas in Europe to breed, was due to go on retirement to the continent with the female Binthy who came from the Netherlands in Oct 2008 to be paired with a new male from Germany, however these moves will now be reviewed given the successful breeding."

The birth of the cub has proven difficult for its 4 year old mother and unfortunately Binthy was unable to produce enough milk for the cub, so it needed to be hand-fed for the last few months. But now the healthy cub will be available to see in its incubation centre this weekend. The park is also looking for kids to come up with a name for its new arrival and is holding a competition. The person with the winning name will win a VIP behind the scenes tour of the impressive and continually improving park. Click here to suggest a name for the red panda cub.
Labels: Nature Notes Today's Science News Todays Science News