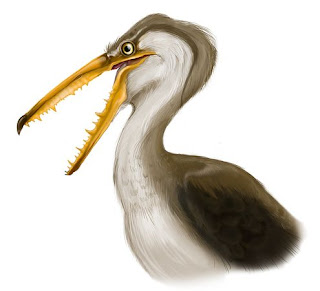 An "exquisitely and exceptionally preserved" fossil of an ancient sea bird has been unearthed in Chile. The newly discovered species, Pelagornis chilensi, had a 5.2 meter (17 ft) wingspan and sharp, spiny "pseudoteeth," making it one of the scariest and largest seabirds ever to have lived.
Pelagornis chilensi lived between five and ten million years ago in the area now known as Chile and was part of a prehistoric group known as the bony-toothed birds. The ferocious seabird's beak had a series of hollow spikes allowing the well adapted predators to grab slippery squid and fish from the ocean.
The well preserved and almost complete skeleton contains the largest and most complete fossil bird wing ever excavated, making the wingspan measurement extremely accurate.
Labels: Palaeontology Today's Science News Todays Science News