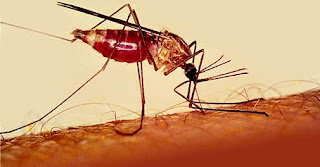 Malaria is a disease caused by single celled protists from the Plasmodium genus but is transmitted by mosquitoes. Many mosquitoes suffer from the disease as a result of their unwanted tenants but others are able to resist the infection. Recently scientists have been studying the mosquitoes that are naturally immune to malaria in an effort to cure them from the disease and, hence, cure the human form too. Our immune system is very different from that of a mosquito. When we are infected by a pathogen we create a specific response - different for each invader. But mosquitoes react in the same way for all infections but the results are just as effective.
To find out how mosquitoes fight off the Plasmodium, the scientists from National Institute of Allergy and Infectious Diseases in Maryland US, fed two groups of mosquitoes mouse blood crawling with Plasmodium. One group became infected, but the other - placed in a room too hot for Plasmodium to grow - did not. Seven days later, the researchers fed both groups the Plasmodium-infected mouse blood again, this time under the same conditions. The researchers found that the previously infected group was up to 10 times better at killing the Plasmodium.
So why were the previously infected mosquitoes better at fighting off the infection? Well it appears mosquitoes fight malaria in two ways, firstly by special immune cells called granulocytles and, secondly, with the help of some of their gut bacteria. So knowing how the mosquitoes fought the infection, the scientists created a vaccine for the mosquitoes. They injected some serum made from the blood of infected mosquitoes into other mosquitoes and then exposed them to the Plasmodium. The scientists discovered that these insects were less likely to suffer from the disease.
So what does this all mean? Well we now have a means of vaccinating mosquitoes against malaria. If they can naturally fight off the infection then they will not be able to pass on the Plasmodium to humans - and hopefully that will mean the end of the human form of the disease. But be patient, this is a long process and may take several years before the results of the findings transfer to the field - but the research is very promising.
Labels: Today's Science News Todays Science News