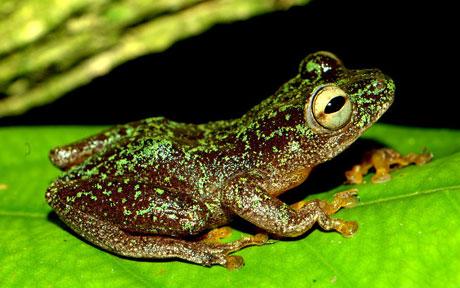 Scientists have discovered two "lost" species of frogs and a "lost" salamander during a recent Conservation International expedition. The three species had been presumed extinct, having not been seen for decades. With more than a third of all amphibians threatened with extinction, efforts to conserve frog, toad and salamander numbers world wide prompted the new study. The endangered status of frogs, toads and salamanders is thought to be due to a variety of causes, including fungal infections, pollution, loss of habitat and climate change. Here is a brief description of each of the three newly rediscovered species:
Mount Nimba Reed Frog (Hyperolius nimbae), from Ivory Coast, was last seen in 1967. Small and well-camouflaged brown frog found in a swampy field in Danipleu, an Ivorian village near the Liberia border.
Omaniundu Reed Frog (Hyperolius sankuruensis, pictured above), from Democratic Republic of Congo, was last seen in 1979. It's described a "beautiful frog with bright green — almost fluorescent-looking — spots on a dark brown background". They had to wait until nightfall to find it, directed by its unique call.
Cave Splayfoot Salamander (Chiropterotriton mousaueri) was found in Mexico's Hidalgo province and had not been seen since the discovery of a single individual in 1941. The salamander is described as "pink-footed and brown" and is believed to only live underground in cave systems. Several were found by scientists during this exhibition, in a cave system which is only accessible by abseiling down a large pothole.
Labels: Extra Froggage Nature Notes Today's Science News Todays Science News