Oh Grow Up! (the onset of puberty) 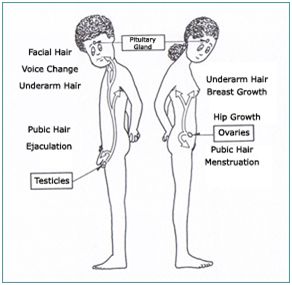 Recent research, reported in the London Times, has shown that the onset of puberty is happening at progressively earlier ages. Over the last 200 years the average age for girls in Britain has dropped from 14 to 10 - in terms of breast growth (with the menstrual cycle kicking-in around 2 years later). Many ideas have been put forward to explain this, with some authorities suggesting that what triggers puberty is an inner belief held by an individual that they are simply 'ready'. At a more mundane level, others cite improvements in diet and health over the last two centuries, and an increase in childhood obesity - fat girls tend to mature faster. In general it seems that Afro-Caribbeans seem to mature slightly earlier than Caucasians. In boys the onset of puberty, marked by the first appearance of pubic hair, occurs around two years later than in girls (on average); and it may be that fat boys mature even more slowly.

- Pelvis broadens
- Vaginal fluids become acidic, and a new population of vaginal bacteria is established
- Menstruation starts (‘menarche’), but the first ovulation is not usually until about 9 months after this.
Puberty expert R. Stanhope, from the Great Ormond Street Hospital for Children in London, says that the earlier a child enters puberty the more risk there is that they will be prematurely sexualised but too immature to deal with the implications. They are more vulnerable to sexual abuse, inappropriate sexual behaviour, sexually transmitted diseases and teenage pregnancy. In boys this can result in more risk-taking behaviour - such as taking drugs, binge drinking and breaking the law. A premature increase in testosterone can lead to aggression in boys who lack the maturity to control impulses. In girls the early onset of puberty may increase the risk of later developing breast cancer, ovarian cancer and type 2 diabetes.
Labels: Biology Stuff Human Body