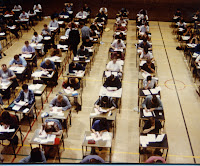 "A review of the Leaving Certificate Agricultural Science syllabus has taken place and a revised syllabus has been completed. This revised syllabus, when approved by the NCCA, will be forwarded to the Department of Education and Science for implementation in schools in due course".

This new syllabus is already out date! What is going on here? Maybe the NCCA should just remove the subject altogether - that would make it fair. I am a frustrated teacher of a subject I, and my pupils, love. Give us all a fair deal!
I must stress, these are my opinions not that of the school.
Labels: Exam Reaction Opinion Pieces

Anonymous said…
It is time someone spoke out as clearly as you have. I am just as angry as you are. Well written.
The practical assessment also needs a big shake up! "no maximum marks for minimum work" was this years slogan yet the minimum work is what was/is stated on the guidelines/syllabus - or what ever you want to call it...
Yours in teaching.
2:25 am

Unknown said…
Cheers. I've been getting a lot of support from fellow ag science teachers. It is so annoying see our syllabus being expanded year on year. There will be a chance for Ag Science teachers to review the exam paper on Tuesday next in Athlone. I can only imagine it will be fractious.
9:17 am

Anonymous said…
I would absolutely agree with the above comments about the higher Ag Science paper. My students knew their course very well and did excellent orals. However this paper will challenge them to achieve A1 grades. They had many visits to local farming enterprises as they are town kids mainly. It is such a pity that this subject has taken a big knock this year and i'm not sure i'll be encouraging students in the future to take this subject.
We are an agricultural country and it is great to introduce it to the younger people. I am not marking exams this year but i am hoping that other ag science teachers will fight a corner for the students on this unfair paper at the marking conference. I firmly believe that some parts of questions off the syllabus should be removed before marking commences.
Ag Science teacher in the North East.
12:11 pm

Anonymous said…
Thanks for writing this up. I thought it was a very awkward exam. As you said, my confidence just plummeted after looking at those tricky short questions. I really had to struggle to answer six questions, and I was banking on genetics, which was a very awkward question, so I had to leave it. I was really hoping for an A1 here, and they really just betrayed the students. I can't imagine that those who wrote the paper hadn't a clear knowledge of the syllabus, and it just seems very unfair. Anyway, it's out of my mind now. No point in doing a post-mortem. Do update on how the conference goes :)
12:28 pm

In total agreement with everything you said. Have posted on it myself and have heard same opinions from other ag science teachers. You are most certainly not alone. Have a read of some of the feedback, I've replied to some of it here. The exam should be defined by the syllabus not the other way round. The marking conference should be interesting....

Unknown said…
This comment has been removed by the author.
3:57 pm

cornelia said…
thanks for that very realistic view of the paper Humphrey. How can we explain this to pupils coming out of the exam that some of those questions were not from syllabus. its beyond frustrating.
7:55 pm

AOC said…
It was such an unrealistic paper.. Love the analytical statement above. Technically if teachers & students got together on this they could create a lot of trouble for the State Examinations Commission as Stated above the syllabus & Exam 2010 don't match. What will be done with the marking scheme 2010???
5:53 pm