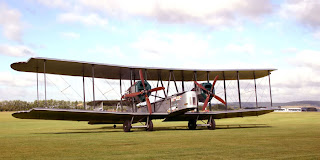 Today in 1919, Capt. John Alcock and Lt. Arthur Browne successfully completed the first, non-stop, transatlantic, aeroplane flight. They flew from Newfoundland to Clifden in Galway in exactly 16 hr 12 min and won the prize offered by the London Daily Mail. Their aircraft was a Vickers Vimy (which was originally designed as a bomber to be used during WW I). Their flight was not without incident. Their radio broke down shortly after take off and fog and drizzle prevented the fliers from seeing anything for much of the journey. They aimed to land in a green field but instead it turned out to be a bog. The plane suffered some damage when it hit the ground and sank into the bog. Both Alcock and Brown came away unhurt. An amazing feat of engineering and personal endeavour!
Labels: Feats of Engineering On This Day