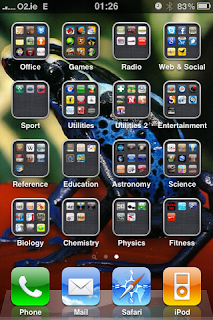 So yesterday evening my Dell laptop took nearly three hours to download the new operating system for my iPhone 3G S (which I love - see here) - over my painfully slow broadband. It then took another hour or so to load it on to my phone before I could finally start to play with the new and improved system. So is it worth it? Well so far, I am impressed. I love the background wallpaper which now covers the home screen as well as the lock screen. I love the new folders feature (shown over) allowing me to categorise all my apps in News, Office, Utilities or whatever you want. Other improvements include the ability to create iPod playlists during playback, built-in spell-checking functionality and iPhone Faces and Places customised graphics as well as improvements in the photo and video capabilities. The email interface and the contacts page each get a face lift but I wish they had changed the calendar a bit though. You can also zoom when taking a photo and switch between app more easily. iPhone readers now get the iBooks following our iPad cousin.
The most significant change though is the multi-tasking features which will allow music (including radio apps) and GPS apps to run in the background while other apps are being used. This should greatly improve the usability of the iPhone. Also apps can now be frozen when closed and may not need to be reloaded when opened again. But this could have a detrimental effect on the battery life of the iPhone and it now means that to fully close a app one must double click the home button and then hold down the app and then close it.  I think there should be an option available within each app to either close or minimise, thus removing this ordeal. But wait until the developers start making apps which utilise the new multitasking powers of the iPhone.  I can only imagine what magic they will create. Overall, a great new way to experience the iPhone in all its glory. For more of the iPhone OS 4 hidden features, click here.
So how do you download it. Well first you have to download the latest version of iTunes (That's 9.2 I think). Connect your iPhone and click "Check for Update" and then let the magic begin.
Labels: Recommended Software