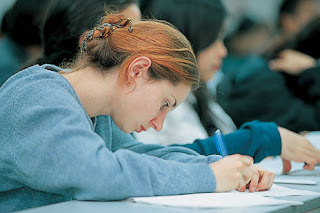 Ouch! Ouch, ouch, ouch. Chemistry proved to be a very tough exam with almost every question having a "sting in the tail". Pupils found it particularly tricky and our chemistry teacher, Mr. Jackson, described it as one of the toughest papers he'd seen. It certainly is not a paper for the pupil aiming for an A1 and many will be disappointed once again that a gifted pupil will find it more difficult to achieve a top grade in chemistry than most of the other science subjects. Pupils who would expect to achieve a C or B might not have too many complaints though.
In section A, the practical questions, pupil were asked on the total hardness of water, the preparation of soap and a HCl - Sodium Thiosulphate titration, each were doable but had a tricky question in each. For example, question 1 part (f) asked if water, having passed through a deioniser, would be suitable for use in the laboratory. Pupils wouldn't necessarily need to know that as part of the practical and many got caught out. In Section B, question 4 (short questions) seemed reasonable but question 5 was very challenging. The question was on atomic theory but some of the questions were poorly constructed, especially part (c). Also the scientists asked were tough. Question 6, organic chemistry, appeared tricky but probably worked out to be fair while question 7, reversible reactions, was again tough. Question 8 assessed pupil knowledge of the Bronsted Lowry theory and was reasonable. Question 9, reaction mechanisms, again had a sting in the tail, part (f). Question 10 and 11 both had a reasonable choice to make them fair, but again with some tricky little questions. In all, many pupils who were confident of achieving an A in chemistry may not be so confident this evening. I would imagine the marking scheme may be softened slightly come the marking conference, so don't be too disheartened.
Agricultural Science is the last remaining science exam, which will be sat on Thursday morning. Good luck to all.
Labels: Exam Reaction