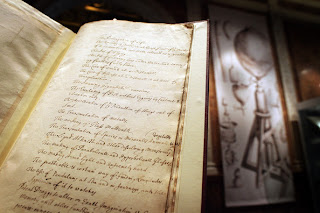 The Royal Society is a London based scientific academy containing some of the world's greatest scientific minds. The society was formed to fund and support Britain's most promising scientists and has been doing so since 1660, 350 years ago. Throughout its history, the Society has promoted excellence in science through its Fellowship and Foreign Membership, which has included Isaac Newton, Charles Darwin, Ernest Rutherford, Albert Einstein, Dorothy Hodgkin, Francis Crick, James Watson, Robert Boyle and Stephen Hawking. In fact, Ireland's Robert Boyle was one of the founding members of the society (Robert Boyle was voted as "Ireland's Greatest Scientist" recently in a poll carried out by http://www.science.ie/). Robert Boyle's private papers (pictured above), revealing his wish list for scientific achievement from 1660, are currently on display in 'The Royal Society 350 Years of Science' exhibition which began in London yesterday. Some of the items he predicted include aeroplanes, organ transplants, sat navs and a means of "curing diseases at a distance".
The Society's core members are the Fellows; scientists and engineers from the United Kingdom and the Commonwealth selected based on having made "a substantial contribution to the improvement of natural knowledge, including mathematics, engineering science and medical science". Fellows are elected for life, and gain the right to use the post-nomial Fellow of the Royal Society (FRS) title. Several Irish scientists have received this accolade in the past including Old Columban (a title given to someone who attended St. Columba's College), William Hayes who has made significant contributions to the world of genetics. There are currently more than 60 Nobel Laureates amongst the Society's approximately 1400 Fellows and Foreign Members. The society now selects 44 new fellows annually. The society today serves as a scientific adviser to the British government and is funded from a range of sources but receives approximately £30 million every year from Parliament. Fore more information about the Royal Society, click here.
Several events are planned throughout the year to celebrate the Royal Society's 350th anniversary. A website has been set up (click here) which details the huge range of events taking place. You can also find them on Twitter and on Facebook.
Labels: People in Science Science Events Today's Science News Todays Science News