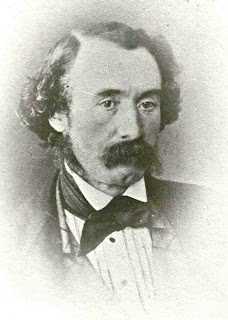 Robert Mallet, Irish geophysicist, seismologist, engineer, and inventor, was born on this day 200 years ago (June 3rd 1810). Mallet was born in Dublin and was educated at Trinity College, entering at the age of 16 and graduating in science and mathematics in 1830 at the age of 20. In 1831 he took charge of his family business - a foundry - which he expanded into the dominant foundry in Ireland. His commissions included the construction of railway terminals, the Nore viaduct, the Fastnet Rock lighthouse, and several swivel bridges over the Shannon. He is also known to have perfected the production of cast iron for the development of more effective canons. His major innovation in bridge technology was buckled-plate flooring, a steel floor plate which is slightly arched to increase rigidity.
As well as his success as an inventor and engineer Mallet is also known as the "Father of Seismology" having built an early form of seismograph - a device to determine the strength of earthquakes. In fact he is credited with coining the word "seismology" and other related terms e.g. the isoseismal map, which he used in his research. He also coined the term epicentre. Mallet was elected Fellow of the Royal Society in 1854, and moved to London in 1861. He was awarded the Telford Medal by the Institution of Civil Engineers in 1859, followed by the Wollaston medal of the Geological Society of London in 1877, the Society's highest award. Blind for the last seven years of his life, he died at Clapham, London, on 5 November 1881 and is buried at West Norwood Cemetery. A true great figure in Irish science history.
Labels: Famous Irish Scientists On This Day Today's Science News Todays Science News

Did you know the RDS is organising an exhibition on Mallet this August? See http://tinyurl.com/38vx352. Look forward to seeing some of you there maybe?