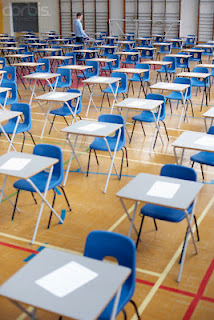 Form VI pupils have just completed their Leaving Certificate Physics exam (well done) and by all accounts the paper was quite a challenge over all. Section A was deemed fair but Section B had some tricky questions. In Section A, question 1 was on force and acceleration and seemed straightforward. Question 2 looked at specific latent heat of vaporisation of water and again was well received. Question 3 was on Snell's Law and again was fine while question 4 was on a experiment to investigate the variation of resistance of a thermistor with its temperature and was again deemed fair. Question 1, 2 and 4 all required pupils to construct a graph so easy marks were on offer. But it was Section B which caused most problems. Question 5, the short questions were fine, but question 6 on gravitation was quite difficult. As part of the question, pupils had to calculate the height above the earth in which a astronauts would experience weightlessness, which many pupils found challenging. Question 7 was again challenging and looked at the Doppler Effect. Question 8 looked at the electronic circuit of a hair-dryer and was fairly straightforward. Question 9 assessed knowledge of X-Rays and was fair enough. Question 10 has a choice of two parts and most chose part A which looked at particle physics. Part B contained a circuit with four light emitting diodes (LED's) and was a little tricky. Question 11 stayed true to form and contained a short passage to read, followed by a series of questions on the topic within the passage - this time mobile phone radiation and radio waves. Question 12 requires pupils to answer 2 out of 4 parts and contained questions on data logging and data analysis, nuclear reactions, sound resonance (the only sound question on the paper) and electric field. Most found two parts they could handle. So overall, a tricky paper which certainly challenged the pupils but most remain confident of a good grade. Attention now turns to Chemistry tomorrow which again should provide a significant challenge.
Labels: Exam Reaction

Anonymous said…
Good to see everyone got on ok, even if the paper was a little tough. Well done all!
7:41 pm