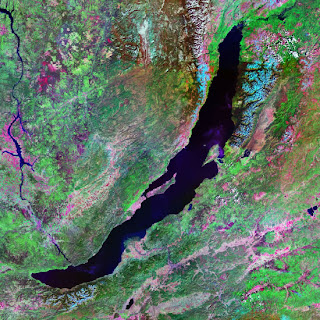 Lake Baikal, on the Russia - Mongolia border is the world's deepest lake and the second most voluminous lake (after Lake Caspian). It contains nearly one fifth of the Earth's unfrozen fresh water and is almost four hundred miles (636 km) long and almost fifty miles (80 km) wide. Baikal's record - a depth of approximately 1,700 metres. Lake Baikal is also the world's oldest lake - aged at close to 25 million years old and it has a surface area of 3.15 million hectares. Baikal's water is  unusually transparent, pure and saturated with oxygen. The lake is known for the amazing wildlife around its 2000 kilometres of shoreline. Few other lakes can equal the extent of biodiversity present in Lake Baikal. It hosts 1,085 species of plants and 1,550 species and varieties of animals. More than 80% of the animals are endemic.
The lake is in a rift valley, created by the Baikal Rift Zone, where the crust of the earth is pulling apart, so it is getting deeper and wider every year (but only by a few centimetres). The lake is completely surrounded by mountains. The Baikal Mountains on the north shore and the taiga are protected as a national park. It contains 27 islands; the largest, Olkhon, is 72 km (45 mi) long and is the fourth-largest lake-bound island in the world. The lake is fed by as many as three hundred and thirty inflowing rivers. In millions of years time, as the rift becomes larger, Baikal could indeed become a new ocean!
Labels: Geology Science Fact of the Week