Below is an article which appears in today's edition of the Irish Times. Being frog related, I simply had to include it! It is written by Steven Carroll. 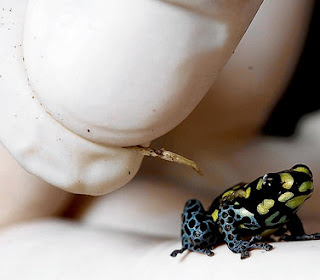 A WICKLOW-based scientist has commenced a study of some of the smallest and most striking creatures from the rainforests of South and Central America. Ian Millichip, chairman of the Herpetological (reptile and amphibian) Society of Ireland, is currently housing a selection of rare tropical frogs in an attempt to better understand their breeding patterns and how the species might be conserved. Mr Millichip, who has a background in toxicology, is studying the husbandry of red-eyed tree frogs and poison dart frogs, which range from 1cm to 5cm in size.
“The red eyed tree frog is an iconic animal and in some respects it almost speaks for the rainforest,” he said.

“They live in trees and lay eggs on the leaves above water. They are nocturnal creatures and as the darkness appears the males will call for females with what sounds like a jack-in-the-box’s cackle.”
The tree frogs were caught in the wild in Costa Rica or Panama, he said, but did not fall under the Convention on International Trade in Endangered Species. The poison dart frog, despite its name, is not poisonous when in captivity, he said.
Toxins are found in these frogs when in the wild but they are obtained in the wild from eating things like mites and ants. The toxins are then stored in the skin. There are about 500 toxins found in the different species.
“In the wild, their toxicity can range from a bitter taste in the mouth if eaten to the ability to actually kill. But that would only be in a few of the 250 species in the super family.” Both breeds of frog live in light and humidity controlled vivariums at his Wicklow home and would be incapable of adapting to the Irish climate, he said.Mr Millichip said poison dart frogs live in a male-dominated world.
“It’s very interesting. The male looks after the young, takes them on his back and will sometimes get a female to lay unfertilised eggs to feed his tadpoles.”
Unlike Irish frogs, Mr Millichip said, the poison dart frog is a poor swimmer and can easily drown.
“Poison dart frogs try to drown one another when they fight and this can happen in as little as an inch of water.”
Mr Milichip said he kept fish as a boy and that his interest in amphibians started during a stint working as the curator of an aquarium in England.
Labels: Extra Froggage Today's Science News Todays Science News