What are the real alternatives to oil?

This post is designed to aid teachers and pupils in a classroom discussion on renewable fuels and the real alternatives to oil, gas and coal as means of producing energy for our planet. This article first appeared in Science Spin and was written by Frog Blogger Humphrey Jones. 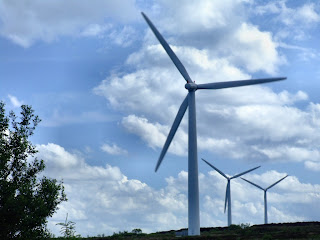 The recent oil spill in the Gulf of Mexico caused enormous ecological and economic damage to the area. The company responsible, BP, have had a PR nightmare and have suffered enormous financial hardship with the cost of the spill somewhere close to $6 billion. An estimated 4.9 million barrels of oil spilled from the damaged well in the 87 days from the beginning of the disaster (which ironically was Earth Day) until the leak was finally capped on July 15. This incident has served to remind us though that oil will not be there forever, with peak production close, and we need to begin the search for real alternatives to powering our technology dependant planet.
Everything we do these days seems to depend on the use of electricity, the majority of which is formed by the burning of carbon based fuels, gas and oil. These materials are finite and within 100 year we will have to rely on other forms of power generation. But which is the best option? Renewable energies are clean and safe, yet currently expensive. Some people don’t want to have “unsightly” wind turbines or solar panels in their back yard. It also needs to be seen if renewable energy generation techniques provide enough electricity to meet our needs. Hydrogen has the potential to replace petrol or diesel in road vehicles without any emissions, and is currently being field tested in California and Hong Kong. And then there is the nuclear question? Can safety concerns be addressed in the world’s nuclear power stations? Can cold fusion be achieved to create large amount of energy from hydrogen, this mimicking the reactions in the Sun?
There are so many questions around this area which can lead to an excellent class discussion. Now let us take a close look at some of the potential solutions to our energy problems and some of the many unanswered questions surrounding them.
Wind Power
Wind turbines have been propping up all around the Irish countryside with opinion mixed on whether they are elegant or an eyesore. But these turbines are contributing greatly to Ireland’s energy needs, with all turbines on the island producing over 1200 Megawatts of energy, which accounts for approximately 10% of our yearly demand. But could be possibly increase the current numbers? Maybe expand the Arklow Bank Wind Farm? There was an interesting proposal from “The Spirit of Ireland” group which called for wind turbines to be used in conjunction with hydroelectric dams – to pump water up from the sea at night time. The hydro station would then release the water during the day to generate power. Would this work? Visit www.spiritofireland.org to find out more.
Solar

The power of the Sun can be used to produce electricity in a number of ways, mainly photovoltaics and concentrated solar power (CSP). Photovoltaics convert the solar energy into electric energy using the photoelectric effect while CSP focuses the heat energy of the sun onto liquid containers using large mirrors, which then turn the liquid into gas, turns turbines and creates electricity. CSP has been the most productive so far but photovoltaics are catching up, with some solar panels now able to produce electric current on even cloudy days. The Solar Energy Generating Systems (SEGS) is the largest solar energy generating facility in the world. It consists of nine solar power plants in California's Mojave Desert and can produce over 350 Megawatts of electricity. SEGS is a concentrated solar power plant, using enormous mirrors to focus heat onto hundreds of panels. A massive CSP plant is being planned for the Sahara Desert which could see nearly 100 Gigawatts of electricity being produced annually. It is estimated that if just 0.3% of the Saharan Desert was used for a concentrating solar plant, it would produce enough power to provide all of Europe with clean renewable energy. But could this be successful? How much would it cost to build? Can solar power serve all our energy needs? Is solar polar useful for motor vehicles?
Wave and Tidal Power
Wave power uses the movements of the oceans waves to create electricity, converting kinetic energy into electrical energy. The potential for energy production is enormous but this has not been realised to date. The largest wave power station currently is in Portugal and it produces only 2 Megawatts of electricity per year. SeaGen is the world’s first commercial tidal power plant and is situated at the mouth of Strangford Lough in Co. Down. SeaGen produces 1.2 Megawatts of electricity per year. Can wave and tidal power solve our energy needs? Are there enough suitable sites for these types of technology? Can the potential of underwater waves be harnessed?
Hydrogen & Biomass
Solar, wind and wave power may provide sufficient energy for our homes in the future, but what about our cars, trains, planes and trains? What are the alternative fuels which will power these vehicles when the oil finally runs out? Many are suggesting that hydrogen powered vehicles could rule supreme – with some cars and buses already in production and in use. Hydrogen is a very clean fuel, producing just water as a waste, which can be used to charge an electric fuel cell. The technology is already available but it is expensive. Hydrogen can be produced easily enough from sea water but does it have the potential to replace all fuels?
Biofuels are produced from living or recently living organisms, such as sugary crops or oily seeds. Bioethanol is the most common biofuel and is produced by fermenting the sugar within crops like wheat, potatoes or sugar beet. Bioethanol is often mixed with petrol, which then can be run in normal cars. In fact, many Irish petrol stations now sell petrol containing 5% bioethanol. But can biofuels be used to run our cars in the future? Is there sufficient agricultural land available to grow the fuel crops? Should this land not be used to provide food for our ever increasing world population? The debate continues!
Nuclear
Many people believe that nuclear power has the potential to solve our energy needs. It is carbon neutral (it doesn’t release CO2 into the atmosphere), cheap and efficient. Many countries rely heavily on nuclear power including the US, which has over 100 nuclear power stations, and France which produce 70% of its electricity from nuclear fuel. Nuclear energy is obtain from the splitting of large unstable atoms, a process called nuclear fission, and heating turbines with the resultant reaction heat. The turbines convert kinetic energy into electrical energy. However, there are concerns over safety, after three major incidents on nuclear power plants over the decades. There are also unease over the safe storage of the waste products of nuclear fission. Can nuclear power be proved reliable? Can nuclear fusion (the merging of two small atoms to produce energy) be harnessed safely? All this remains to be seen.
Conclusion
There are considerable options available to replace oil, gas and solid fuels. But maybe the first stage in this process is the conservation of our current energy sources. A cross-curricular discussion on our energy needs and use can be a great way to get pupils engaged in science and its application to world problems.
Labels: Class Discussion Environment Science Spin

AMA Nation said…
It would be a great challenge to teachers now by bringing or to let children know about environment struggle.
11:15 pm