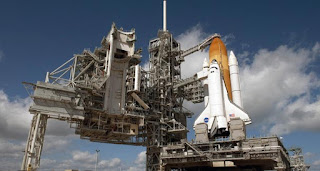 Space shuttle Endeavour rocketed into orbit on what is likely to be the last night-time launch for the programme. The shuttle, with six astronauts on board, took flight from Cape Canaveral, Florida, before dawn, igniting the sky with a brilliant flash seen for miles around. Thick, low clouds that had delayed a first launch attempt on Sunday returned, but then cleared away just in time. There are just four more missions scheduled this year before the shuttles are retired. Endeavour's destination, the International Space Station, was soaring over Romania at the time of lift-off. The shuttle is set to arrive at the station early on Wednesday. Commander George Zamka and his crew will deliver and install Tranquility, a new room that will eventually house life-support equipment, exercise machines and a toilet, as well as a seven-windowed observation dome which has the biggest window ever sent into space, a circle 79 centimetres across. It will be the last major construction job at the space station. Both the new room and observation dome - together exceeding $400 million - were supplied by the European Space Agency.
Labels: Astronomy Space Exploration