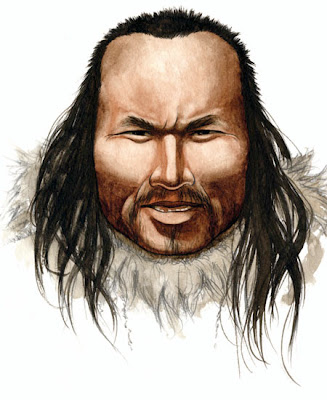 Meet Inuk, a 4000 year old man whose hair, which was preserved in Greenland's permafrost, provided enough DNA for a complete genome analysis. The researchers say the man had brown eyes and thick dark hair, although he would have been prone to baldness. They say the genome also shows that his ancestors migrated from Siberia. The man has been named Inuk, which means "human" in the Greenlandic language. The study also revealed his blood group (A+), his risk of developing certain diseases, that he faced a high likelihood of going bald, and perhaps most improbably, the dry consistency of his earwax. Other tests on the hair suggest the man survived on a marine diet of seals and seabirds.

The researchers say an analysis of the genome shows that Inuk was from the Saqqaq culture. The team now has genetic evidence that Inuk's metabolism and body mass meant he was adapted to living in a cold climate. The Saqqaq hunted seals and seabirds and relied on the sea for most of their food. Archaeological remains show they lived in tiny tents in winter. Click here to see an article in today's Irish Times to find out more about Inuk.