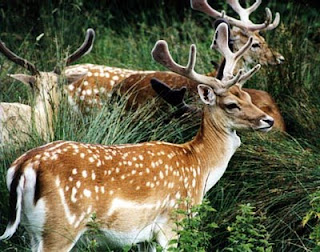 The Fallow Deer is the most common deer in Ireland, in fact many of them can be seen wandering around the grounds of St. Columba's College. The Common Fallow Deer (the most common type) have a summer coat which is a chestnut colour with white spots on the side. Their winter coat is greyish-brown without spots. Fallow deer have a white rump patch that is completely surrounded by a heart-shaped dark line. The tail, which is black on top and white underneath, is quite long and extends below this rump patch. Adult males (bucks) are generally larger than females (does), standing about 1m at the shoulder and weighing around 100kg. The does are about 80cm tall and only about half the weight of males. The antlers of bucks are quite large - up to about 75cm in length. These are shed in spring after which a new set immediately begins to grow. In comparison to those of the red and sika deer, the antlers of the mature male fallow deer are distinctively flattened (palmate).

Fallow are a herd deer but group size is influenced by habitat. They favour a varied habitat with cover and grazing, that is mixed deciduous woodland or pine with grazing. They are primarily grazers and will graze all year round, however the will eat herbs, leaves, acorns, young deciduous shoots and farm crops (sugar beet). Bucks grow antlers in late Spring and have a soft skin covering called velvet. Fallow deer are not native to Ireland. The Normans brought them in in the 13th century. They can now be found in most counties in Ireland, though there are special herds in Dublin and in Killarney National Park. The mating season (or rut) starts in October and lasts one month. During the rut the bucks move into the females' area and competition for females can be intense. Fallow bucks will fight quite aggressively for dominance and may aggressively lock antlers and push or wrestle. The bucks emit sounds (groans) during the rut which are rhythmic and cough-like. Scrapes and markings can be found in rutting areas which are scented by glands on the bucks face.

Fallow deer are a protected game species and may only be hunted with a licence from the National Parks and Wildlife Service.