Nuclear Fusion on the Horizon? 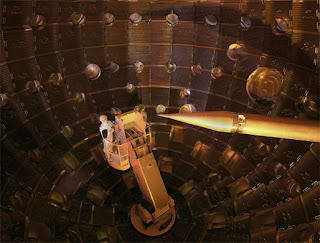 Using the most powerful laser system ever built, scientists have brought us one step closer to nuclear fusion power. The same process that powers our sun and other stars, nuclear fusion, has the potential to be an efficient, carbon-free energy source—with none of the radioactive waste associated with the nuclear fission method used in current nuclear plants.

The new energy concept, penned Laser Inertial Fusion Engine (LIFE), looks at using the power of lasers to stimulate nuclear fusion. Thanks to the new achievement, a prototype nuclear fusion power plant could be operating within a decade, speculated by Siegfried Glenzer, the leader of the project at Lawrence Livermore National Laboratory in California. Glenzer and colleagues used the world's largest laser array—the Livermore lab's National Ignition Facility—to superheat furl hydrogen, thus forcing two hydrogen atoms together to form a helium atom. This technigue has the potential to created an enormous amount of clean energy. Nuclear fission, by contrast, involves the splitting of atoms, resulting in the formation of nuclear waste products.
The laser demonstration means scientists are now much closer to triggering nuclear fusion in a controlled setting—something that's never been done before and which is necessary if fusion is to be harnessed for energy. Exciting times ahead then ... For more on this story, click here. Below is a YouTube video (an exerpt from BBC's Horizon program) featuring the National Ignition Facility and their quest.
Labels: Today's Science News