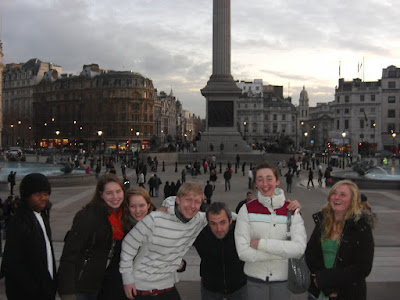 On a chilly morning in January thirty three Columbans from years IV and V accompanied by five members of Staff set off for London to spend the next few days sampling the assorted treasures of one of the most wonderful cities in the world, which just happens to be on our doorstep. The inspiration for this tour came from Mr Humphrey Jones who casually mentioned the possibility of a joint Biology/History trip to me during break back in September.
We aimed to maximise our time in London and having arrived at Gatwick we began our tour with a coach tour of some of the main sights and experienced a flavour of what lay ahead. Many of our party had been before but as Samuel Johnson remarked, '...when a man is tired of London, he is tired of life; for there is in London all that life can afford'. However, none of us had visited the recently opened Darwin Centre which really demonstrated the highest standards in the state-of-the-art display of countless specimens of scientific and biological interest. Here in the Darwin Centre cocoon we found incredible specimens displayed in a dramatic new public space. I was interested in the smart card system which enabled the visitor to take home information about the countless exhibits Mr Jackson was in heaven! The Natural History Museum proper was approximately five minutes walk from our hotel and here there was much to absorb our attention from dinosaurs to polar bears.
That evening we went to the show 'Wicked'. It received mixed reviews from our party - I felt the music was rather unmemorable but the staging undeniably impressive. On subsequent evenings we visited the cinema and had a meal in Chinatown after a brief visit to Covent Garden - here Jake Jacobsen made an exhibition of himself (in the nicest possible sense) as he was recruited to participate in a work of street performance.
We visited the Tower of London the following morning and then travelled down the river to Westminster. From there we walked to Whitehall and visited the Cabinet War Rooms and the relatively recently-opened Churchill Museum - both of which have really well-thought out displays and evocative reconstructions of life during the Second World War, warranting far more time than we had at our disposal.
Undaunted by our busy schedule, we visited the Science Museum the following morning where I was amazed by a replica of the module which ws used by the Apollo space programme - it really did not look robust enough to effect such an epic adventure! The exhibition also answered all of those questions about journeys into space which pupils always ask! In the afternoon we had a tour of some of the paintings in the National Gallery and some of us visited the wonderful National Portrait Gallery. Those with energy to spare then went to shop in Sloane Square.
Our penultimate museum was the Imperial War Museum as for many this was a highlight. We had approximately two hours in the Museum and were able to look at the military hardware in the main hall, go to the 'Trench experience' and the 'Blitz experience'. Many of the pupils visited the sensitive and poignant Holocaust exhibition on the top floor.
Finally we arrived at the British Museum and had a 'highlights tour' with our now familiar guide examining the Portland vase, the Elgin marbles and 'Ginger'. I was amused to see that the pupils were quick to locate the portable chairs and were able to look and listen in comfort!
Although it may seem odd to go to London in January, it had the great virtue of being relatively free of other tourists and we were able to move around the marvellous museums and galleries freely. The weather was cold but not wet. We walked miles, sampled many of ~London's wonderful treasures and whetted the appetitie of many for a return visit. It is worth mentioning that many of the guides commented on the interest and manners exhibited by our group and I am pleased to report that our party were worthy ambassadors for the College.
Mrs. Marie Haslett, History Teacher
Labels: Science Trip Reports