Science Fact of the Week 42 - Mercury 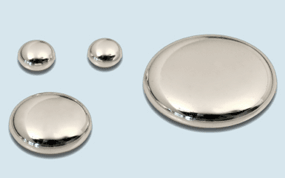 Mercury is a very strange metal. It is a liquid at room temperature, but it is so dense that cannon balls float in it. With the atomic number 80 in the periodic table and with an atomic weight of 200, this element is more dense than lead. With a melting point of −38.83 °C and boiling point of 356.73 °C, mercury has one of the narrowest ranges of its liquid state of any metal. Mercury is, in fact, the only metal that is liquid at standard conditions for temperature and pressure and one of only six elements that are liquid at room temperature.

Mercury occurs in deposits throughout the world mostly as cinnabar (mercuric sulfide), which is the source of the red pigment vermilion, and is mostly obtained by reduction from cinnabar. Cinnabar is highly toxic by ingestion or inhalation of the dust. Mercury poisoning can also result from exposure to soluble forms of mercury (such as mercuric chloride or methyl-mercury), inhalation of mercury vapour, or eating fish contaminated with mercury. Mercury has many uses though and is used in thermometers, barometers, electrical devices and much more. Interestingly, mercury has a negative coefficient of surface tension, which means that the meniscus on the surface is the other way up from normal.