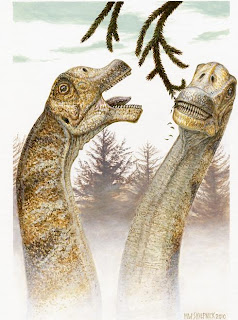 Fossils of a previously undiscovered species of dinosaur have been found in slabs of Utah sandstone that were so hard that explosives had to be used to free some of the remains, scientists said on Tuesday. The bones found at Dinosaur National Monument belonged to a type of sauropod — long-necked plant-eaters that are said to be the largest animal ever to roam the land. The discovery included two complete skulls from other types of sauropod — an extremely rare find, scientists said. The fossils offer fresh insight into the lives of dinosaurs some 105 million years ago, including the evolution of sauropod teeth, which reveal eating habits and other information.
The new species is called Abydosaurus mcintoshi. Researchers say it's part of the larger brachiosaurus family; hulking four-legged vegetarians that include sauropods. For more on this story click here.
Labels: Dinosaurs Palaeontology Today's Science News