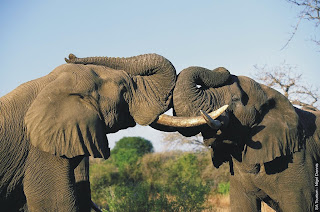 The trade of elephant ivory has been restricted since 1989, after countries attending the Convention on the International Trade in Endangered Species (CITES) voted to end the slaughter of the gentle giants for their "white gold". It is estimated that between 700,000 and 1 million elephants were slaughtered during the 1980's for the sale of ivory, including many young immature animals. Since the ban was introduced the number of poachers have declined and the numbers of elephants have increased again. But today, the African nations of Tanzania and Zambia are petitioning CITES to "downlist" the elephants' conservation status and allow for the sale of stockpiled ivory (they claim this ivory was collected from elephants that died of natural causes). However, fears are that removing the ban would allow for an increase in poaching once again. CITES are planning to meet in Doha tomorrow. Let's hope they see sense and not allow the status of the African Elephant, one of the world's most beautiful creatures, to remain as a protected species. To read more about this intriguing story click here.