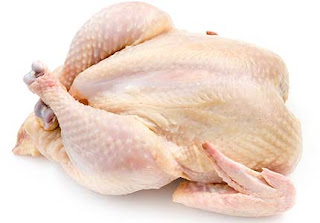 A new study suggests that 98% of chicken produced in Ireland is contaminated with a potentially harmful bacteria, which is the most common cause of food-borne illness here. The campylobacter bacterium is a major cause of gastroenteritis through the consumption of contaminated poultry which has been under-cooked. Symptoms include diarrhoea, abdominal pain, fever, headache, nausea and vomiting.

The study by the European Food Safety Agency also says Irish chicken had the second highest incidence of the bacteria among 26 EU countries in 2008. The level of incidence in Ireland was nearly one-third higher than the European average. Commenting on the findings, the FSAI said a study it is in the process of completing has found that 13% of external surface packaging on chicken products and 11% of retail display cabinets were contaminated with campylobacter. It must be noted, however, that the bacteria are killed by proper cooking, while strict kitchen hygiene also helps to reduce the risks involved. For more information click here.
Labels: Today's Science News