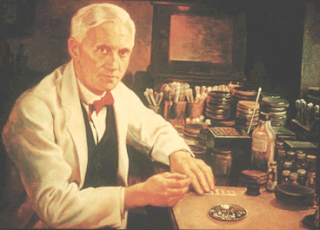 Sir Alexander Fleming was a Scottish bacteriologist, born in Darvel, Strathclyde, who is most famous for discovering penicillin. In 1928, while working on influenza virus, he observed that mould had developed accidently on a staphylococcus culture plate and that the mould had created a bacteria-free circle around itself. He experimented further and he found that a mould culture prevented growth of staphylococci, even when diluted 800 times. The active substance, which he named penicillin, initiated the highly effective practice of antibiotic therapy for infectious diseases. Fleming shared the Nobel Prize for Physiology or Medicine in 1945 with Ernst Boris Chain and Howard Walter Florey, who both (from 1939) continued Fleming's work. He died on the 11th March, this day, in 1955. Click here for a full biography.
Labels: On This Day People in Science