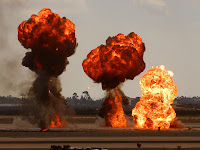 Last Tuesday evening I sat down to watch some telly. Click, flick, click. Ahhhh! Richard Hammond, of the BBC, doing another science programme? Ah surely there will be plenty of explosions? Hammond, famous for presenting on Top Gear, has produced other "factual" science programmes, most notably the highly forgettable  Brainaic series, a painful collection of "experiments" which generally involved explosions and caravans. So this new programme surely was going to be much of the same? And, to by initial despair, yes it was. Predictably, the programme began with Richard Hammond blowing up the side of a cliff.
But, behold, there was something different about this programme. All the explosions seemed to happen in slow motion - ultra slow motion to be precise. This was no ordinary Richard Hammond sick bag. In  this programme, Richard Hammond's Invisible Worlds to give it its full name, Hammond "goes beyond the limits of the naked eye and explores the hidden secrets of the invisible world around us". The programme uses some serious high tech cameras to see what our eyes simply can't see in real time; the shock waves of an explosion, bubbles bursting, lightning striking upwards, the power of a sneeze, to name but a few. Again, this is no ordinary Richard Hammond sick bag. There is actually some real science in this - and wonderful stuff too, presented in a fun and informative way - not in a Brainaic annoying way. So I would definitely recommend tuning into tonight's second episode, "Out of Sight" on BBC 1 at 9:00pm. Below is a clip from last week's "Speed Limits" episode. This episode is available via BBC iPlayer (if you happen to be in the UK only though). Well done Richard Hammond, for bringing us some real science. But please, stop blowing stuff up!
Labels: Opinion Pieces Videos What's on the Telly?