Why No Minister for Science? 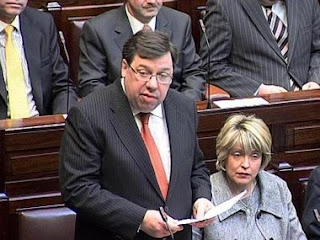 Why do we no longer have a "Minister for Science"? In his latest reshuffle, Brian Cowen has renamed his departments, changing the name of the Department of Education & Science to the Department of Education & Skills. So where has science gone? Surely not to the newly penned Department of Enterprise, Trade & Innovation. Science is far too important a portfolio to be added to an already under performing department. Mr Cowen stresses that the restructuring of the government departments is in an effort to create more jobs and in particular the movement of rebranding of science to innovation seems to be in an effort to refocus and streamline a programme of funding in Research & Development in the third level education sector. This apparent move seems to be in an effort to produce more jobs in the science R&D sector (a novel idea but this government has a poor history in the area) but I expect I feel the grassroots of science will be ignored. Also, why is this area being moved out of the Department of Education? Does Brian Cowen not trust his Tánaiste anymore? Does he think she will have enough to handle with proposed industrial action in the primary and secondary sector? I think Mr. Cowen needs to reconsider his restructured cabinet and re-establish science as a full government portfolio.
Labels: Opinion Pieces Today's Science News

Susan at Stony River said…
I've had a few long and very interesting conversations recently about the disrespect for, and neglect of, science and scientists in many western countries. Considering the challenges our world is facing right now -- and that it's the only one we've got -- such an attitude is short-sighted and dangerous.