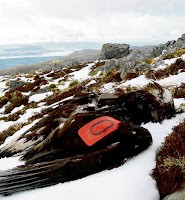 Last night I was watching Duncan Stewart on RTÉ's new series of Eco Eye. In this episode he was talking to members of the Golden Eagle Trust about the successful reintroduction of birds of prey into Ireland, including Golden Eagles and White Tailed Eagles (Click for a previous post). I was reflecting on the beauty of these animals yet how delicate their habitat is now, mainly due to the persistent practice of placing poisoned carcasses to kill foxes and crows in land where these majestic animals nest and prey. Sadly, however, many of the national newspapers report today that another golden eagle has been found dead in Sligo, poisoned by nitroxnil poured over a dead or aborted lamb carcase. This brings the total number of poisoned birds of prey – comprising White tailed eagles, golden eagles and kites –in Ireland to nine over the past two and a half years. It is no coincidence that we are right in the middle of the lambing season. This is not practiced by all farmers, only around 3%, but has an enormous effect on the work of the Golden Eagle Trust. Unfortunately, this practice is not illegal, and the Golden Eagle Trust believe the government must act. In fact, late last year, the Golden Eagle Trust lodged a formal complaint with the European Union concerning the failure of the Irish Government to implement legislation protecting Ireland's rare scavenging birds of prey. We must stop this now, before we lose these majestic animals for ever. Click here to read more about this story.
We have a series of posts on Ireland's Birds of Prey. Click here to see these posts.
Labels: Today's Science News