Here is an extract from an article in Today's Guardian Newspaper. 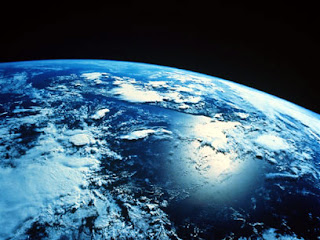 The earthquake that struck Chile on Saturday may have shifted the Earth's axis and created shorter days, according to scientists at Nasa. Richard Gross, a geophysicist at NASA's Jet Propulsion Laboratory in Pasadena, California, said the 8.8 magnitude quake could have moved the Earth's axis by 2.7 milliarcseconds (about 8cm) – enough to shorten a day by about 1.26 microseconds.

A large quake can shift huge amounts of rock and alter the distribution of mass on the planet. When that distribution changes, it changes the rate at which the planet rotates, which determines the length of a day. "The length of the day should have got shorter by 1.26 microseconds," Gross told the Bloomberg news agency. "The axis about which the Earth's mass is balanced should have moved by 2.7 milliarcseconds."

Susan at Stony River said…
Oh no! I need longer days, not shorter ones -- even if we're only talking about microseconds.

It does give pause, doesn't it? Things we take for granted as constant, like the length of our days or the sun in the sky -- they're not as permanent as we like to believe.

Meanwhile, am I the only one who gets irritated by the Irish media's insistence on "Nasa" when the word is an acronym and therefore "NASA"? It's only marginally less embarassing than all their typos and misused apostrophes. Every time they do it I grind my teeth down a little more, and at my age I can't afford much more enamel.
12:08 pm

Unknown said…
I'm with you Susan on the NASA thing. I do my best to use the capitalised form. But it is not just an Irish media thing as the article in the Guardian also used Nasa. Anyway, got to go. Days are getting shorter you know?
12:24 pm