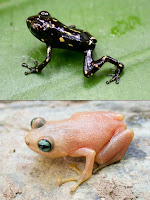 Scientists have found a new frog species in Papua New Guinea, which undergoes an amazing colour change from a black, yellow-spotted youngster to a peach-coloured, blue-eyed adult. According to a report in National Geographic News, the frog, known as Oreophryne ezra, was recently discovered in a tiny, mountaintop cloud forest in southeastern Papua New Guinea. Though a few other frogs are known to switch colours as they mature this seems to be the most striking change ever discovered. But why the amphibian undergoes such a drastic transition is far from black and white (see what I did there?). The juveniles look like poison dart frogs, possibly in some way mimicking their poisonous cousins, but why they lose this advantageous colour is a bit of a mystery.
Labels: Extra Froggage Today's Science News