Skip to main content
Labels
Posted by Jeremy Stone May 31, 2010 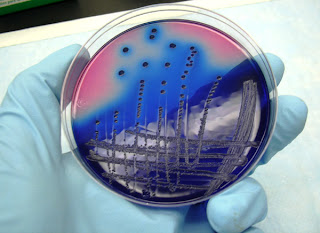 The inventor of the Petri dish, Richard Julius Petri, was born on this day (31st May) in 1852 in Barmen, near Wuppertal in Germany. In 1876 he qualified as a military doctor in Berlin, and from 1877 worked as an assistant to Robert Koch (a famous bacteriologist and later a winner of a Nobel Prize). At that time bacterial cultures were generally grown in a liquid broth, but another of Koch’s assistants Fanny Hesse introduced the use of agar jelly, kept under a bell jar, as a medium on which to culture bacteria. Petri found that this method produced many contaminated cultures, and in 1887 came up with the idea of placing a slightly larger glass lid on top of the dish containing the culture and thus the Petri dish was born. A Petri dish is a shallow, cylindrical dish made of plastic or glass with a cover, used for tissue cultures and to hold solid media for culturing microbes.
Petri went on to run a tuberculosis sanatorium and then to work in the Berlin Museum of Hygiene. As was typical of German medical doctors of the time, he was rather vain and a strict disciplinarian who enjoyed the trappings of uniform. He became somewhat corpulent, and one contemporary observer is said to have remarked that the military sash around Petri’s stomach reminded him of the equator around the globe. Petri died in Zeitz on December 21st 1921.
Labels: Biology Stuff Great Inventions On This Day People in Science