Skip to main content
Labels
Posted by Unknown May 10, 2010

This week's Science Fact is a collection of facts about the extremes of our home planet, Earth. 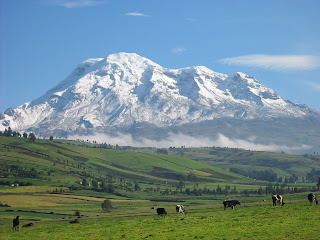 Highest Point on Earth: At 29,029 feet (8848 meters), Mt. Everest is famed as the highest peak on earth. And that’s true but it’s also not true. It all depends on how one looks at it. Technically, Mt. Everest’s rocky peak is the highest bit of land from sea level. But because the earth isn’t a perfect sphere, certain lower points are in effect “higher” in space or further away from Earth's core. Mt. Everest is less close to the moon and stars than another mountain which is relatively unknown. And that is Mt. Chimborazo in Ecuador (pictured above). It’s just over 20,000 feet high, so while it’s not as tall as Mt. Everest, it is actually closer to outer space due to the shape of the earth.
Deepest Point in the Oceans: The Marianas Trench, off of Guam in the Pacific Ocean, is the deepest point in the world’s oceans. It it over 7 miles – more than 36,000 feet – deep. If Mt. Everest were placed in the trench the summit would be more than a mile under the surface. The pressure at the bottom of the trench is more than 1,000 times stronger than at sea level. The United States Navy sent two naval officers to the bottom in a vessel called the Trieste in 1960. Amazingly, they observed fish, shrimp and other creatures living on the bottom of the sea floor.
Coldest Place on Earth (and the driest and windiest): Antarctica is a land of extremes. It’s not inhabited year round by humans because it’s simply too cold. In 1983 scientists recorded extreme cold temperatures as low as -129 Fahrenheit. It’s also the wettest place on earth, but simultaneously the driest. The reason it’s the “wettest” is not because of rainfall; since Antarctica is covered by 98% ice, it’s technically very wet. However since it’s also the aforementioned coldest place in the world, it gets very little precipitation – less than 2 inches a year. Which makes Antarctica a desert. A brutally cold ice desert with a massive trench full of even more…ice. Three for the price of one!
Hottest Place on Earth: The aptly named Death Valley is famously blistering hot, but the hottest place ever officially recorded is the El Azizia desert in Libya. In 1922 the temperature reached 136 degrees. Death Valley’s hottest temperature on record is 134 degrees. When it’s that hot, what’s another two degrees really?
Lowest Point on Earth's Surface: The Dead Sea is the lowest place on land that’s below sea level, at 1,378 feet. On the border of Jordan and Israel, the road around the Dead Sea also happens to be the lowest road on earth. Famous for its salinity (over ten times that of the Mediterranean Sea), the Dead Sea is said to be home of the first health retreat. Because of the extreme salt content, no life can survive in the sea, hence the name.
Labels: Fragile Earth Science Fact of the Week