Skip to main content
Labels
Posted by Unknown May 21, 2010 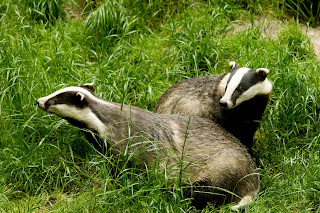 The badger is one of Ireland's largest, most distinctive and misunderstood mammals. Badgers are heavy, thick-set animals with powerful limbs. Easily recognisable, the head is white with two vertical black stripes from ears to below the nostrils. The rest of the body is grey but in there may be variations. Erythristic badgers have a sandy coloured fur, often deepening to a more reddish tone. Albino badgers are more rare. They too lack the melanin pigment and are pure white. A typical adult measures about 1m in length.
The badger is found throughout the temperate parts of Europe and Asia, from Ireland in the West to Japan in the East. It is found in all European countries including some of the Mediterranean Islands (Crete and Rhodes), only being absent from the most northern parts of Scandinavia and Russia. Ireland and England have the healthiest populations and badgers can be found in all counties here. It is "estimated" that Ireland has a total population of around 250,000 badgers. However, although badgers are a protected species under the Wildlife Act of 1976, thousands are killed on roads every year and many more are killed illegally i.e. on farms and also by people involved in badger digging and baiting activities (Badgers have been linked to Bovice Tuberculosis).
Badgers are omnivorous, eating both plants and animals. The mainstay of the badgers diet, in northern Europe, is the earthworm. However, they eat an extremely wide variety of foods, depending on what is available locally. They will also eat many insects and invertebrates (snails, slugs, beetles etc.), small mammals (rats, mice, young rabbits and even hedgehogs) or even reptiles and amphibians (lizards and frogs)
Badgers live in large underground tunnel systems called setts. There are normally 3 to 10 entrances to these setts, which are much larger than rabbit holes and oval in shape. Setts are comprised of a huge system of tunnels and chambers. One sett that was excavated in England contained over 850 metres of tunnel, 50 chambers and 150 entrances. This however is not so surprising when you consider that badgers inherit their setts and so the setts can be very old, in some cases centuries old.
Badgers are very territorial and defend an area of 50 to 150 hectares encompassing the main sett, annexe setts and foraging areas. The boundaries of the territory are usually outlined by well-worn paths as are the routes between the main sett, any annexe setts and the foraging areas. Badgers mark these paths with scenting by using latrines that they regularly use. Like all Mustelids, badgers secrete a very odorous scent from their subcaudal glands, that they use for scenting their paths and latrines.
Badgers are nocturnal, coming out at night to play and feed. They live in social groups that typically consist of about 6 badgers, sometimes called clans. These clans consist of a dominant male, a dominant female and their subordinate offspring. Mating may occur anytime after the sow has given birth in January to March, up until September. Badgers live for over 10 years to 12 years and there is a case of one living for 15 years.
Labels: Ireland's Fauna Ireland's Mammals Nature Notes