Skip to main content
Labels
Posted by Unknown May 03, 2010

Science Fact of the Week 50 - The Planet Mercury 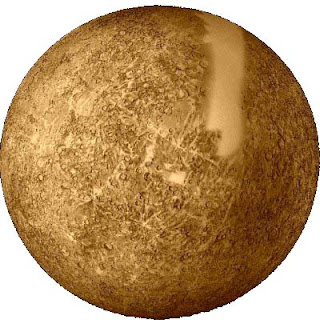 The planet Mercury is a terrestrial planet, the closest to our sun, and the smallest in the Solar System. It is named after the Roman god of commerce, travel and thievery. Being so close to the Sun, the planet Mercury can experience extremely high temperatures. The temperature on Mercury may reach 450 degrees celsius during the day. But, amazingly, at night the temperature may drop as low as -170 degrees celsius. This drop in temperature is down to the fact that the planet Mercury has little or no atmosphere. The sunlight on Mercury’s surface is 6.5 times as intense as it is on Earth due its closeness to the sun.
Mercury's surface resembles that of Earth's moon, scarred by many impact craters resulting from collisions with meteoroids and comets. Some of these craters, near the planet's poles, are believed to hold some frozen water, permanently shaded from the Sun's heat. While there are areas of smooth terrain, there are also lobe-shaped scarps or cliffs, some hundreds of kilometres long and soaring up to 1.6 kilometres high, formed by early contraction of the crust. Mercury is the second densest planet after Earth, with a large iron core having a radius of 1,800 to 1,900 kilometers (1,100 to 1,200 miles), about 75 percent of the planet's radius. However, Mercury is only about one-third the size of the Earth.
It is difficult to see Mercury in the sky, mainly due to its proximity to the Sun and its small size. However, at certain times of the year, Mercury can be seen low in the western sky just after sunset. At other times, it can be seen low in the eastern sky just before sunrise. Mercury is the fastest moving planet in our Solar System orbiting the sun at an average distance of about 58 million kilometres, compared with about 150 million kilometres for Earth.
Only one spacecraft has ever visited Mercury: Mariner 10, which imaged about 45 percent of the surface. Much of what we know about Mercury was discovered by Mariner 10. A new NASA mission to Mercury called MErcury Surface, Space ENvironment, GEochemistry, and Ranging (MESSENGER) will begin orbiting Mercury in March 2011 to investigate key scientific areas such as the planet's composition, the structure of the core, the magnetic field, and the materials at the poles. A joint ESA and Japanese mission to Mercury will begin in 2013.
Labels: Astronomy Science Fact of the Week