Skip to main content
Labels
Posted by Unknown May 27, 2010 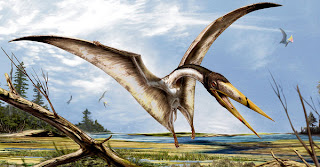 Scientists from University College Dublin, led by Nizar Ibrahim - an expert on north African dinosaurs, have identified a new type of pterosaur (giant flying reptile or pterodactyl) that existed about 95 million years ago. The flying dinosaur was unearthed in Morocco and is described as having a lance-shaped lower jaw, making it look like a huge heron, and a wing span of over 6 metres. The dinosaur would have lived in what is now the Sahara Desert - at the time a "lush green tropical paradise" according to Mr Ibrahim.
The team also discovered rare dinosaur footprints, including some that record several animals walking along the same trail. As well as finding hundreds of dinosaur teeth, they also unearthed bits of giant crocodiles, two more pterosaurs and some new species of fish. The scientists have named the new pterosaur Alanqa saharica from the Arabic word 'Al Anqa' meaning Phoenix, a mythological flying creature that dies in a fire and is reborn from the ashes of that fire.
Labels: Dinosaurs Palaeontology Today's Science News Todays Science News