Skip to main content
Labels
Posted by Unknown May 26, 2010

This article first appeared in today's edition of The Irish Times and is written by LORNA SIGGINS, Irish Times Marine Correspondent. 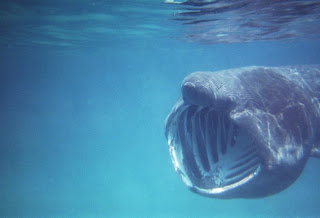 IRELAND’s northernmost point is currently “teeming” with a record number of basking sharks, according to marine researchers. More than 100 of the world’s second largest fish were tagged by the Irish Basking Shark Study Group off Donegal’s Dunaff and Malin Head within the past week. This compares with 106 tagged during the entire season last year, according to the study group’s leader, Dr Simon Berrow. The sharks were up close to the sea surface, mouths wide open, as they could filter up to 1,500 cubic metres of water an hour, he noted. “So the amount of food available for them must have been colossal. There were many more around that we just couldn’t tag – it was absolutely spectacular.”
Malin Head was identified by the group last year as one of the top European “hotspots” for the sharks which are also known as liabhán chor gréine – the great fish of the sun – due to their tendency to swim just below the surface. However, the numbers counted over a four-day period within the last week exceeded the group’s expectations. The group also believes that reported sightings of breaching whales off this coast may in fact be basking sharks.
The basking shark is not protected under Irish legislation through the Wildlife Act, although there is an EU moratorium on catching or landing the fish as a by-catch. It is protected in Britain, and there are plans to extend this legislation to Northern Irish waters. Dr Berrow – who is best known for his work with the Irish Whale and Dolphin Group – spent four days studying activity at sea with National Parks and Wildlife Service conservation ranger Emmet Johnston, Dr Ian O’Connor and Darren Craig of the Galway-Mayo Institute of Technology. It is believed that the sharks are active during winter and do not hibernate, as previously thought. One shark tagged in the Isle of Man in 2007 and traced to Newfoundland, had travelled almost 10,000km in 82 days. Sightings of basking sharks off Sligo, Mayo, Cork and Waterford have also been made in the last few days, according to Dr Berrow.
For more information on Basking Sharks, click here to view a previous Frog Blog post.
Labels: Ireland's Fauna Nature Notes Today's Science News