Skip to main content
Labels
Posted by Unknown May 18, 2011 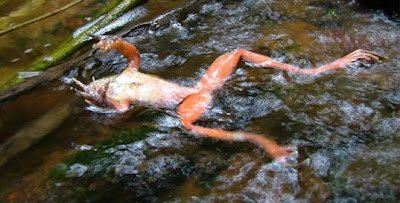 Frog, toad and salamander populations worldwide have been declining rapidly over the last few decades, mainly down to infection by a strain of 'Chytrid' fungus called Batrachyochytrium dendrobatidis or Bd for short. A chytrid is a type of fungus that mainly live in water or moist environments. The chytrids are amongst the oldest and most primitive types of fungi on the planet are mostly saprophytes, meaning that they feed on dead and rotting organic matter. Some chytrids are parasites that live on plants or invertebrate animals. However, Batrachyochytrium dendrobatidis is unusual because it is the only chytrid that is a parasite of a vertebrate animal, specifically amphibian.

An infected amphibian develops a  disease called chytridiomycosis, where their skins becomes "keratinised", meaning it becomes excessively thick and tough. Amphibians drink water and absorb nutrients through their skins so this is very serious. In severe cases they shed their skin and become lethargic. Sickened Salamanders lose their tails while frogs lose weight and cannot turn over when they are lying on their backs.

Scientists believe that this fungus originated in African Clawed Frogs. These frogs carry the fungus on their skin but suffer no ill effects from it. However, African Clawed Frogs have spread far beyond their native habitat, carrying the fungus with them, due to global trade. Scientists around the world have used these frogs for research and, from the 1930s to the 50s, to conduct pregnancy tests.

Scientists are trying to develop a cure for Bd. While there has been some success with treating frogs with Bd in captivity, no successful treatment has been developed for animals in the wild as yet. The situation is very serious with nearly all of the 6000 amphibian species capable of being infected with Bd, with 30% of those species already threatened by extinction (not principally from Bd alone). For more information on Bd click here.