Skip to main content
Labels
Posted by Unknown May 24, 2011 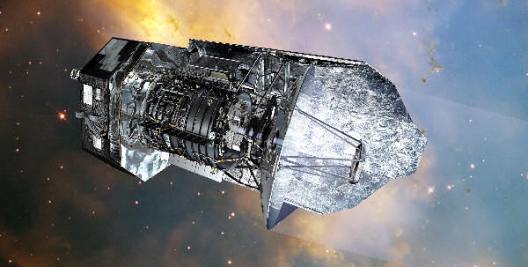 On May 14th 2009, the European Space Agency (ESA) launched the Herschel Space Observatory on board an Ariane 5 rocket, along with another of ESA's satellites Planck (click here to read a previous Frog Blog post about ESA's Planck). Both space craft are currently located approximately 1.5 million kilometres from Earth, in the second Lagrangian Point (L2 - an area of space on the side of the Earth not facing the Sun). By orbiting in L2 Herschel is not troubled by any atmospheric absorption and avoids any problems caused by thermal infrared radiation from the Earth interfering with observations.
Herschel is a telescope designed to view celestial objects within the infra-red and Herschel's telescope is the most powerful infra-red telescope ever flown in space. Large parts of the Universe are too cold to radiate light within visible wavelengths and can only be viewed using infra-red telescopes. By observing areas of space using these wavelengths, Herschel is able to see celestial objects like never before seen and find new objects hidden in clouds of dust and space debris, that are invisible to other telescopes like Hubble. Herschel's major objective is to discover how the first stars and galaxies formed and how these galaxies evolved to give rise to present day galaxies like our own. Here are some of Herschel's most spectacular images.
Herschel is packed full of high tech instruments. The telescope’s primary mirror is 3.5 m in diameter, more than four times larger than any previous infrared space telescope and almost one and a half times larger than that of the Hubble Space Telescope. The large mirror allows Herschel to collect almost 20 times more light than any previous infrared space telescope. This allows for the scientists at ESA to study the "cool universe" in more detail than ever before. The spacecraft carries three advanced science instruments: two cameras and a very high-resolution spectrometer. The detectors in these instruments are cooled to temperatures close to absolute zero by a sophisticated cryogenic system. Communication with the Herschel, to receive data and convey instructions, is carried out via the ground station in Perth, Australia. Herschel is named after the German born Britist Astronomer William Herschel, most famous for the discovery of Uranus and two of its moons. Click here to see a 3D model of Herschel from the ESA Science website.

Below is an image of the Andromeda Galaxy, our closest neighbour, photographed within the optical, infra-red and x-ray frequencies - a brilliant example of the extra deminsion Herschel has given to astronomers. 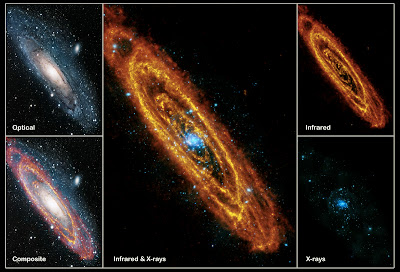