Skip to main content
Labels
Posted by Unknown May 17, 2011 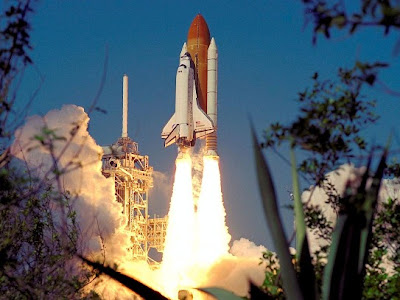 Yesterday the Space Shuttle Endeavour dramatically began it's final mission (STS-134) when it launched from Kennedy Space Center en-route to the International Space Station, where it will dock on Wednesday. During the 16-day mission, Endeavour and its crew will deliver the Alpha Magnetic Spectrometer (AMS), a device which will be fixed to the top of the ISS and will study cosmic rays, and spare parts including two S-band communications antennas, a high-pressure gas tank and additional spare parts for Dextre, the robotic "handyman" on board the ISS. On board are Commander Mark Kelly, Pilot Gregory H. Johnson and Mission Specialists Michael Fincke, Greg Chamitoff, Andrew Feustel and European Space Agency astronaut Roberto Vittori. On Endeavour's return, the only active ship left in the NASA's shuttle fleet will be Atlantis, which is expected to undertake its final mission sometime in July. Below is an animated overview of Endeavour's final mission
Labels: Space Exploration Today's Science News Todays Science News