Skip to main content
Labels
Posted by Unknown May 05, 2011 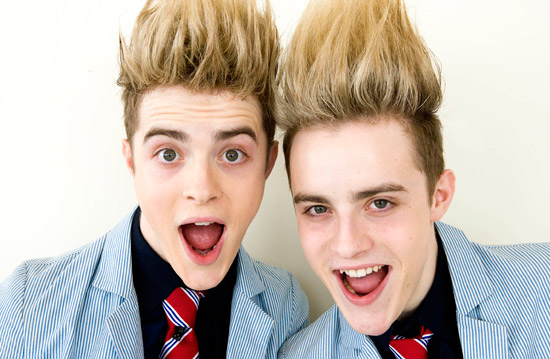 Jedward – regardless of whether you love them or you’re totally bewildered by their success, you can’t ignore them. CLAIRE O’CONNELL does a double-take on the science behind the dynamic duo.
Hairspray
Jedward’s trade-mark giant quiffs mean they stand out from the crowd, but how do they get all that hair to stand on end? Unless you are orbiting in space, hanging upside down or spending time underwater, your hair isn’t going to go that way by itself, but adding hair product, such as gel or hairspray, can make your barnet defy gravity. Styling products work by putting a thin coat of plastic over the hairs. As these polymers dry, they stick together and hold the new hairstyle in place. You’d wonder how many empty hair-product containers can be found stacked up in Jedward’s dressing room.
Brain connections
John and Edward are just coming to the end of their teens, which means they have been busy growing in recent years. We can all see how we grow in height during our teens – and it’s often in rapid spurts that see your favourite clothes consigned to younger siblings or the charity shop far too quickly. But there’s a lot of development going on inside the teenage skull, too.
By the time we are getting stuck into primary school our brains are pretty big, but there’s still plenty of work to do in building up connections in there that allow our central command unit to function well. During adolescence we are thought to mature particular regions at the front of the brain that are involved with making decisions.
Ow, my leg
With all the jumping around they do, it’s hardly surprising that the boys have had a few accidents. Last year Edward broke his leg, and John recently had to perform on stage in a wheelchair because he had sprained his left ankle. How does a body get over those kinds of injuries? Bones might look like they are just like a scaffold supporting and protecting your body, but they contain plenty of living tissue. If you break or fracture a bone, cells can soon start the healing process. They grow and develop into cartilage and new bone, which then gets remodelled to hopefully act like it did before.
Sprains are also sore. They can happen when a joint, such as your ankle, gets knocked or wrenched and the ligaments that hold bones together get stretched or torn. There’s swelling and pain, and sometimes a severe sprain may need surgery. But over time it eases and hopefully you are up dancing again soon.
Lipstick

The twins’ catchy ditty Lipstick has probably stuck in your head at some point over recent weeks. The real cosmetic has lots of science behind it though, and women are thought to have been using colours to enhance their lips for thousands of years.
Today, lipstick generally uses a base of oil and wax to carry colouring agents that give your lips the desired hue. And whether the finish is matt or gloss depends on the light-scattering properties of the formulation.
Applying lipstick is meant to enhance attractiveness, but a small study in 2003 suggests that eye make-up might have more of an effect. The researchers asked men and women to rate the attractiveness of 10 volunteers whose faces were adorned in different ways with foundation, eye make-up and lipstick.
“Women judged eye make-up as contributing most to the attractiveness,” wrote the authors in the International Journal of Cosmetic Science. “Men rated eye make-up and foundation as having a significant impact on the attractiveness of a full facial makeover. Surprisingly, lipstick did not appear to contribute to attractiveness independently.”
Identical twins
Double trouble or twice the fun, it’s pretty obvious that John and Edward Grimes are identical twins. That means that they both developed from the same fertilised egg. But are identical twins really exactly the same genetically? A study from 2008 reckons there can be small differences. The researchers looked at 19 sets of adult twins and found that, in the cases of some genes, individual twins had different numbers of copies. That said, identical twins are remarkably genetically similar, so they are handy for scientists who want to work out how strongly nature (genes) and nurture (your environment) influence such traits as height or how likely you are to develop a disease.
Labels: Irish Times BANG