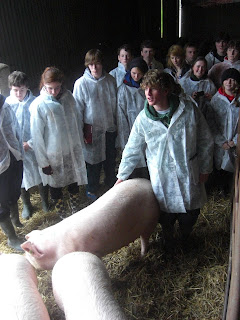 On Thursday November 6th, members of the Form V and Form VI Agricultural Science classes visited two farms in Co. Meath as part of their Practical Work Portfolio. The farms in questions were a Commercial Pig Unit in Moyvalley, owned and run by Roy Gallie. On his 250 acre farm he also grows winter wheat, spring barley and winter barley, which in turn feed the pigs. The well managed farm was competently and enthuasiastically presented by the farm owner, Roy, to the pupils. On his farm he maintains 180 sows, which in turn produce approx 3000 pork animals per year as well as 1000 F1 cross commercial breeding stock. All the females pigs, sows, on his farm are Landrace while the males, boars, are Large Whites. Afterwards, we travelled to the Kilucan and to the Wengtes farm. This farm has been recently purchased by Michael Wengtes, father of current pupils Rosemary and Hannah. There we were introduced to Pat Melvin, who maintains a stock of rare beef breeds, which are used for breeding and beef production. 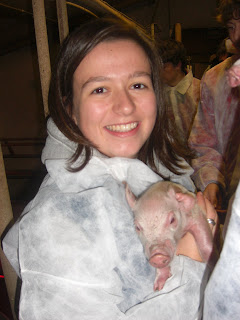 All of the animals are suckler, which means that the young suckle the mother, rather than being commercially milked. The unusual breeds include Dexters (both red and white), Irish Moiled Cattle (for more information click here), the french breed Vosgienne and many others. Pat was clearly passionate about his animals and what he was doing and it was rubbing off on many of the pupils also. I would like to thank both farmers for their wonderful presentations and for treating us so well. I would like to particularly thank the Wengtes family for being so accommodating and for feeding the troups before departing home. These farm visits are essential in allowing a practical subject like agricultural science to be successful in a school and I appreciate greatly the generosity of farmers in allowing us explore their farms.
Here are some more pics! 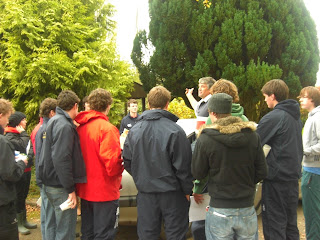 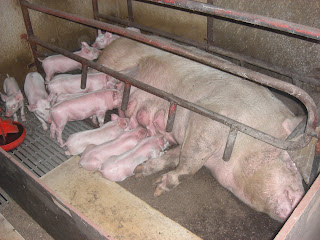 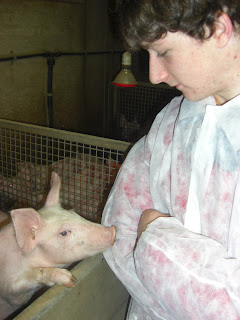 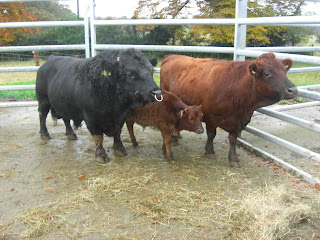