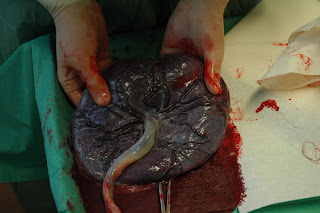 Today in my V Form Biology class, we were discussing the role and function of the placenta during foetal development! A discussion ensued regarding placentophagy, or the practice of eating the placenta. As disgusting as it may seem, most mammals (the only animals that can form a placenta) eat their placenta. There is also a school of thought that holds that placentophagy naturally occurred to hide any trace of childbirth from predators in the wild, though the fact that the amniotic fluid is not similarly ingested by the mother seems to discount this theory. Most placental mammals participate in placentophagy, including, surprisingly, herbivorous ones. Pinnipedia (seals, sea lions and such) and Cetacea (whales and dolphins) are exceptions to mammalian placentophagy, as is the camel. Placentophagy has been observed in Insectivores, Rodents, Carnivores, Ungulates (hoofed mammals) and Primates. Marsupials reabsorb rather than deliver the placenta, and therefore cannot engage in placentophagy they do, however, vigorously lick birth fluids as they are excreted.
So what about humans? Although the placenta is revered in many cultures, very few customarily eat the placenta after the newborn's birth. Those who advocate placentophagy in humans, mostly in modern America and Europe, Mexico, Hawaii, China, and the Pacific Islands believe that eating the placenta prevents post natal depression and other pregnancy complications. A variety of recipes are known to exist for preparing placenta for eating in spite of the extended taboo against eating parts of human beings. Consumption of uncooked human placenta carries risks associated with other human blood products, primarily risk of hepatitis B,C and HIV infection. However, eating one's own placenta does not carry those risks. Incidentally, the word placenta comes from a Latin word for a flat cake!
In case you are hungry, here is a simple recipe! Into the roasting pan, put one onion, red pepper, tomato sauce, bay leaves, pepper, salt and a clove of garlic... and 1 to 3lbs of placenta! Enjoy your lunch!
Labels: Class Discussion